Doris Markham’s Story takes you back to Kansas City in the 1930s and 1940s as well as rural Missouri living at the turn of the twentieth century. Join Doris on her escapades through three marriages and a dozen boyfriends. Miss Kansas City kitty Doris Markham’s Story is based on a true story about one spirited country girl’s struggles to survive in the Kansas City when it was a wild town, some called it The Paris of the Plains with illegal gambling, speakeasies, gangsters, barbecue, and jazz.

Her story is a love story, okay several love stories mixed with drama and comedy. People described Doris Markham as a pistol, a free spirit and stubborn. She could be called an early woman’s rights activist because she often said, “What’s right for the goose, is right for the gander.” 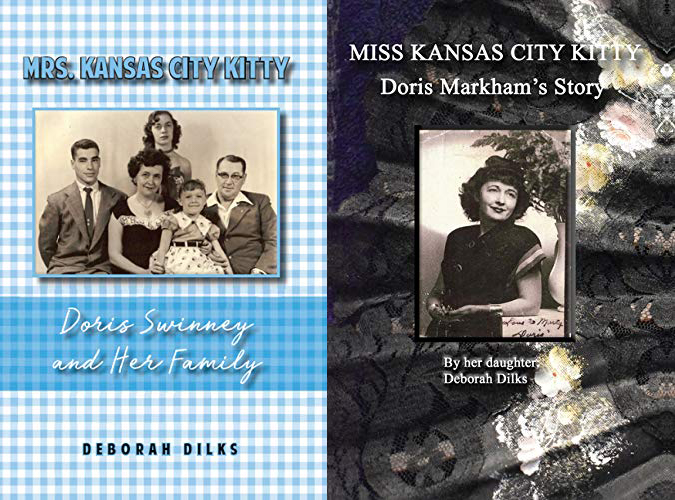 In this book you will see Kansas City from a working girl’s view and find gangsters, kidnapping, murder, prostitution, speakeasies, supper clubs, bars and even a famous person or two. When Doris won a Kansas City Kitty competition, her life changed.

The sequel to this two-part memoir is a continuation of stories in the life of “Miss Kansas City Kitty – Doris Markham’s Story.” As the book opens, Doris is married to her third husband, Martin Swinney, and has a ready-made family.

We join the family in 1949, when they move back to Doris’s hometown of Jameson, Missouri, and her mother’s farm. Neither Marty nor his children have ever lived on a farm. Marty’s war injuries are still plaguing him, as he tries to support his family while going in and out of the hospital. Doris goes back to work in Kansas City during the turbulent 1960s and the race riots.

In this book, you will see life in north Missouri during the 1950s and 1960s and Doris’s experiences raising teenagers during that time from both rural and urban perspectives. There will be highs and lows, good times and bad in Doris’s life as the years go by quickly. Doris lived to be 96 – almost 97 -years old, and this book will explore the last half of her life.